Von, of the eponymous Vondom Labs, has aroused her fans again with another single, entitled “Dealer’s Gone”.

Anyone who has dabbled into Brooke Candy’s universe would feel right at home in the tracks that Von creates as, just like Brooke, the hyperpop singer-songwriter and producer is aimed at promoting sex-positivity through music. This is shown in her lyrics, that tend to skew towards empowerment and sex, but also through her production style, which is done through a vibrator. All of Von’s sound design is elaborated through the waveforms recorded during her orgasms in order to create music that promotes sexuality not only lyrically but also from the production itself. This take on production along with her one of a kind and witty voice make her music not only fun to dance to, but necessary in the age of limited bodily autonomy we are facing.

“Dealer’s Gone” itself is a danceable track that has a mixture of pop and trap influences throughout. Von has crafted the song in a way that can be seen as three different pieces, about halfway things slow down and showcase some more impressive vocals, only to speed back up at a breakneck pace. Anyone hearing this at a party or during an intimate moment with a partner would be stimulated. Lyrically, Von focuses on herself throughout the track (quite logical as the sound is the result of masturbation), stating “who says I rigged the game baby I’m number one” and seeing herself as the top of the game. Fittingly this song has come exactly a year after her debut track was released and shows that Von has no signs of slowing down. Her advocacy for sex-positivity, the overall sophistication of the track, and her otherworldly website make anyone hope that there is much more to come.

If you like this track, you should check our Edgy Poppers playlist right now! 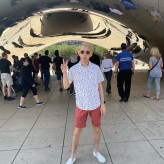 Lover of literature and film, Tyler lives near Cincinnati, Ohio and appreciates a lively debate as much as a quiet movie night with friends.