0 0
The notion of the infinite has been pondered by humankind since the days of ancient Greek philosophers: a way of describing something without any bounds, immeasurably large. On face value it would appear odd, then, that the word crops up in the title of Vagabon’s debut ‘Infinite Worlds’, which is a compact set of eight tracks which don’t even touch the thirty-minute mark – small by most albums’ standards.

However, hidden within this ostensibly small record of DIY indie-rock are indeed snatches of the infinite: worlds of emotional intensity which reverberate across time and cultures in virtue of their universality. Vagabon is the recording title of Lætitia Tamko, a young woman who found herself at home within New York City’s fertile DIY indie-rock scene. Similar to other stalwarts of that sphere, such as Frankie Cosmos and Told Slant, Tamko crafts nuggets of intimate lo-fi pop: ones which find strength in their fragility and effortlessly capture the minutiae of a life of longing.

Whilst some of Vagabon’s songs borrow from the rich history of American underground rock (opener ‘The Embers’ recalls Built To Spill, and the powerful chug of ‘Minneapolis’ is reminiscent of Dinosaur Jr), it is her voice that takes these reference points and turns them into something new. Her heartfelt vocals alternate between whispered diary entries and soaring proclamations of defiance and willfulness to exist as one is.

On “Infinite Worlds”, Vagabon crafts nuggets of intimate lo-fi and looks for a place to call home through an act of defiant self-creation

Vagabon knows that delivery is as important as lyrics: both the stutter at the end of ‘The Embers’ and the gaps between words in ‘Fear & Force’ create emotional weight, elevating the songs to loftier heights. The lyrics themselves, however, are also strikingly powerful. Whereas ‘Fear & Force’ appears at first to be a heartsick lament sung over plucked guitar and sparse drum machine claps, a line like “You won’t work for the government that lost your sister” is delivered without warning: an emotional pulling-out-of-the-rug from under the listener which adds intensity and intrigue.

Raised in Cameroon before moving to New York at a high-school age, it becomes hard not to read Vagabon’s work as coming from the perspective of the feeling of being an outsider, and the striving to belong and create a home for oneself. Indeed, synth-led centerpiece “Mal à L’aise” translates from Tamko’s mother tongue of French as ‘discomfort’. It’s a track that stands out from the rest of the album, a dreamy whirl of synths and murmured voices, but it works as a stop-gap between the emotional intensity of the guitar-led songs, and shows promise of Tamko developing her project in different directions. The theme of looking for a place to call home continues: ‘100 Years’ swells and bursts as she sings “If we sell this house, I won’t go”, a defiant act of attempting to hold on to what is dear to her. The mundanity of everyday occurrences take on new forms in Tamko’s deft writing; a lost friend becomes “only a casualty in my cleaning house again”, a cold apartment floor becomes a metaphor for a loss of love. The use of physical spaces to describe emotional ones is touching. All the while, however, Tamko has been creating a room of her own through her emotional catharsis.

On closing track ‘Alive And A Well’ she sings openly that “I will make a home that is my own”, and even though she concedes that if she moves around her home won’t be for a while, the line strikes at the core of Vagabon’s power. It is through an act of defiant self-creation that one finds home, and it can be done in this difficult world of infinite sadness, for equally there is infinite hope.

Could even have more synthy tracks 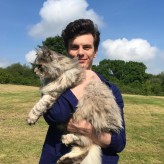 Based in rainy London, Caleb is a deep-thinking, coffee-drinking lover of anything lo-fi.