Paris via Berlin-based artist Thomas Azier’s new EP “S T R A Y” is out today via his own label Hylas Records.

Following the release of his critically acclaimed sophomore LP “Rouge”, Thomas Azier spent a lot of time touring, hence producing and writing on the go. Mainly composed in hotel-rooms with a laptop and a USB mic, his new 4-track EP “S T R A Y” is a reflection of his state of mind during his time on the road.

The Dutch singer-songwriter and producer has proven he can do everything in the past. On “Echoes” and his new EP “S T R A Y” he extracts the perfect middle ground between the dark electronic beats of his debut album and the pop, organic charms of its follow-up. Thomas Azier knows what he’s doing and his evolution, propelled with the sense of assuredness of a man whose time on the road seems to have informed him of how he wants to sound is one he can be proud of. Like he sings on the eery electro-pop single, it has never been so clear.

To present his new body of work, Thomas Azier asked his friend Rob Kauffman, a marionettist from Berlin, to “perform” “Echoes” with the help of his puppet Jimmy. Watch the quirky, Obi Blanche-directed video just below and discover the “S T R A Y” EP: 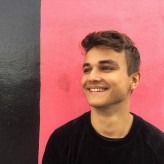