Multi-disciplinary artist Sandy Hsu has tapped into her divine intuition to bring us ambient pop so feather-light, it sounds more at home in heaven than on earth. Premiering today, “Angel Energy” is the second single from her upcoming sophomore EP to be released on Healthy Tapes.

Sandy released two EPs while she was a student in secondary school: Sandy in 2013 and Suburbia in 2015, the latter of which was accompanied by a fully immersive visual art installation that exhibited at the National Gallery of Victoria in Melbourne, Australia. She released her follow-up record Savage Youth on Decibels Records in 2016, and now that’s she’s graduated from the Victorian College of the Arts at the University of Melbourne, she’s back with a more refined, stripped-back sound that showcases her voice and the powerful impact of simple, thoughtful composition.

On her first single of 2019, “Limbo,” Sandy Hsu grappled with a reckoning all-too-familiar to many who grew up with mental illness in childhood:

I was finishing off my first year at art school, turning 19, and had just been constantly learning new things and growing. For the first time in my life I remember actually wanting to be well, and wanting to be better mentally. I had spent most of my adolescence in a deep depression and was rather tethered to it. At that time I completed writing ‘Limbo’, I could finally admit to myself that I wanted I be well, but I was also terrified of that idea and who I would become if I was.

If “Limbo” was the admission, “Angel Energy” is the acceptance. On this track, Sandy promises herself that she will seek out the beauty and light in the world and allow it to swallow her. She manifests that energy by allowing her voice to drive the song, layering reverb-drenched vocals to create a heavenly choir of her own making. In tapping into the “Angel Energy” of the universe, Sandy creates her own, proving once and for all that we can only save ourselves from ourselves.

Sandy Hsu will be supporting serpentwithfeet at a sold-out show at the The Workers’ Club in Melbourne on June 14, and will return to the same club in support of imbi the girl on June 22.

In the meantime, HighClouds is honored to offer you an exclusive first listen of “Angel Energy” below. 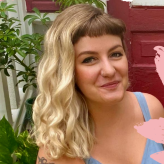 Erin is a writer & DIY music enthusiast based in the small yet mighty city of Kalamazoo, Michigan, USA.