In my totally unbiased and objective opinion, New York imma let you finish, but LA is one of the best cities of all time, of all time. LA has some of the best people to vibe with, the best places to ‘gram about, and of course, the best music scene. Springing from the LA dance-pop scene earlier last year is the duo KOLAJ, consisting of the talents of singer-songwriter Tessa Houston and producer/composer Mighty Mike McGarity. Listen to their new amazing track “Into You”!

They piqued interest with their infectious single “The Touch” and since then have been garnering attention everywhere with their lighthearted, dance-worthy tracks.

In their new bop “Into You”, KOLAJ has collaborated with South Korean K-pop singer Eric Nam.

Nam is quickly becoming a chart regular with the release of several singles and mini albums. With collaborations like the one with KOLAJ, he’s bridging the gap between the Eastern and Western music scenes.


“Into You” opens with plucky strings that form the basis for an upbeat melody characteristic of KOLAJ’s LA nightlife-esque sound. It reminds you of times spent in dimly lit rooms with a (non-alcoholic, of course) drink raised in hand and of when nothing else really mattered except for the fact that you were young and alive and the energy of the night was pushing its way through your veins. The beats are punchy and seem to bounce from sound to sound, crescendoing under the guide of Houston’s slinky voice yet still maintaining a light, reverberating, almost effervescent quality that embodies youthful freedom and carefreeness.

Houston has a voice that is smooth and controlled, but cracks ever so slightly at the edges, which cuts an edge of sexiness to this danceable number. Eric Nam joins in with a voice that (at the risk of sounding like a sad coffee addict), reminds you of a Starbucks Caramel Macchiato. It’s husky and heavy, but there’s a sweet smoothness to his vocal control which allows him to weave through varying pitches effortlessly. His voice is warm and inviting, pulling you in as the beats build up in intensity behind him. By the time the song culminates to a synthy breakdown, you’re already jumping up and down from the tables. And once the song fades out as gently as it began, you will be reaching for the replay button, wanting to grasp onto those few minutes you were able to feel weightless and just keep riding the waves of the good vibes from a dance club somewhere nested deep in the lights of LA.

Stream the song on Spotify, Soundcloud, or purchase on iTunes! 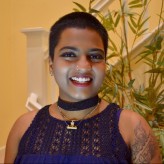