AFFAIRS don’t feel nearly ragey enough to have an all caps band name, but power to them for trying to pull it off. The group is a collection of five Englishmen who all met at Hull University, drawn together by a mutual love of 80’s tunes. Their style is self-described as “doom pop”, and while I don’t know if I buy it as a real classification, it fits the band’s creative feel. They just dropped a new EP entitled “Stained Gold”, and I’ve got some pretty strong opinions on the result.

Listening to AFFAIRS‘ “Stained Gold” is slightly uncomfortable: it is like listening to a mashup of Future Islands and “Phantom of the Opera”!

The four track EP opens up with “Runaway”, and it’s a strong start for the release. I like the synth they’ve chosen to help get things going, it makes me think of an electronic steel drum. Even when it’s not the prominent instrument, you can still hear its playful sound in the background, trying the whole track together. When the vocals first came in, I was mildly startled – it was definitely not what I was expecting. Overall, the singing style disappointed me, but it is a unique sound. You’ll definitely know it’s AFFAIRS on the radio!

“Play” immediately follows, and is a bit more guitar and drum heavy. It helps to amp up the set and keep the flow of the EP moving. Listening to “Stained Gold” makes for a slightly uncomfortable fourteen minutes, like listening to a mashup of Future Islands and “Phantom of the Opera”. The lyrics are fine, but nothing was really impressed upon my mind.

The third track, entitled “Out of the Deep”, slows things down, or attempts to. Really it just results in a muddled sound that distracts from anything the singer is trying to express, but it’s not like there’s much to pay attention to anyway. About half the chorus doesn’t actually include words – it’s oddly vacant for a song that feels like it’s supposed to be the emotional core of the EP. The guitar portions, as is consistent throughout the release, are well composed and well arranged.

Finally, “Brothers” is the fourth and final track. Ttroys what could’ve been the saving grace for AFFAIRS, destroying my last hopes of enjoying this review.

A unique vocal style and well composed electric guitar portions somewhat salvage the EP from completely tumbling off the cliff. With some refinement and tuning, I can see a future where AFFAIRS pushes their way further into the spotlight. For now though, I think I’ll just grimace and wait for their next attempt.

The Good
The Bad 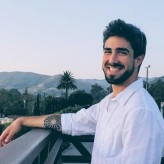