0 0
The first thing you notice about Moses Sumney‘s ‘Doomed’ is that its tempo is almost imperceivably slow. The second, you’re suddenly feeling emotionally naked. A sensation that is very well captured by the Allie Avital-directed clip.

‘Doomed’ consists of nothing more than a truly haunting vocal performance from Moses Sumney over the backing of subtle synthesisers. It almost builds in the manner of a Sigur Rós song. The melody starts as if it is tenderly being sketched; you clearly see the figure that is being drawn but it is yet to be clearly fleshed out. As the song progresses the melodic lines are drawn more forcefully; you begin to read a depth of pain that was not apparent earlier. By the end of the song, the combination of the tender shading and the forceful lines give us a clear picture of a melancholic figure, struggling to connect with the world around him.

Moses Sumney is a singer who is almost a cross between an R&B singer and Bon Iver or Sufjan Stevens. His music seems to be an experimental, present-day iteration of deeply traditional music. Like Bon Iver’s Justin Vernon or Sufjan Stevens, he is a singer/songwriter for the laptop age. They are artists uninterested with merely being ‘the next Dylan’. Their music reminds you that there is material of worth in the present day and in the past, that there are things we can learn from each without making an unnecessary choice between one or the other. Moses Sumney is a singer who is just as likely to accompany himself on a guitar as he is to sing a cappela with autotune, or to collaborate with Skrillex like on ‘Hundred Waters‘. Saying this, it’s his more electronic tracks like ‘Doomed’ that really capture my attention. I only wish real loneliness sounded this beautiful. 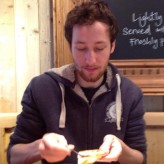